So recently, we posted a video from the World Economic forum showcasing some of the benefits in Costa Rica which includes “free healthcare”.  Some people took offense to this and thus commenting that it is not free, and that these videos should not be allowed as “looks are deceiving”. So, let’s take a look at healthcare in Costa Rica.

To be frank, healthcare is not free in any country, someone has to pick up the tab and in socialized systems such as in Costa Rica, everyone is supposed to contribute to the system. CAJA (as the healthcare system is known in Costa Rica) is supported by three types of contributions: contributions by the people (whether employees or self-employed, or voluntary contributors), contributions by employers, and contributions by the government. For the users, the contributions are a percentage of their income which it will either be 9% of their salary or sliding scale for self-employed people and voluntary contributors, and therefore, it is not free as the user pays a rate according to their income. I think that the word free is misused for health care in Costa Rican when referring to the fact that when you receive service it is not required to make a payment either for the medical service or for medications; both of these items are covered under the contributions that people pay.

Furthermore, CAJA is actually free for some people. People with no income can register with CAJA without having to pay and will be able to receive service and medications and in some instances even a pension, certainly the people who qualify for free healthcare are extreme cases of poverty.

It is understandable that some people may think that healthcare is free in Costa Rica when compared to the US where you are required to pay deductibles or copays when receiving services. Copays and deductibles are billable in addition to the monthly premiums that people have to pay. According to the Centers for Medicare and Medicaid Services  the average spending on healthcare for females $8,315 and for males was $6,788, while the average cost for people over 65 was $18,988. According to the World Health Organization the average cost of healthcare in Costa Rica was $929 USD in 2018, and in the US was $9,536 USD. So, while the cost of healthcare in Costa Rica is not free it feels like it when you compare it with the costs in the US. 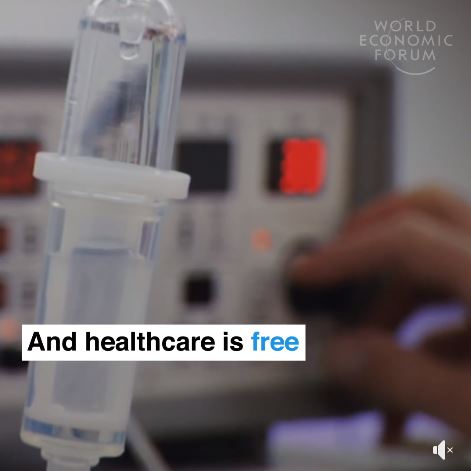 Life Expectancy and quality of Healthcare

Considering that people in the US spend ten times the amount of money per capita compared to Costa Rica, it seems that Costa Rica is able to achieve better results as it ranks 30th which is just above the US according to the World Health Organization. A few years ago Business Insider issued a list of countries that beat the US when it comes to overall healthcare, this list of countries includes, Dominica, Costa Rica, Chile and Colombia. Furthermore, life expectancy is better in Costa Rica than in the US., and once again this little country is able to produce better results with ten percent of the cost per capita.

Certainly, you can have access to high quality healthcare in the US if you can pay for it. If you cannot, then you are out of luck. The Affordable Care Act intended to take care of the high costs of healthcare for Americans notwithstanding the heated opposition by the republicans. There is still much discontent with the healthcare in the US, we will see what happens.

In the meantime, Costa Rica continues to struggle to improve the CAJA system.

Is the video misleading?

The video only said that healthcare is free, which we addressed in the undergoing lines, but it does not say that it is prompt or perfect, but overall, people have it pretty good in Costa Rica when it comes to health services.

As noted in a previous post, there is a dual system in Costa Rica, one private system and one public system. While the latter is more commonly use by the working class, the people with little more extra cash can either pay additional insurance or out of pocket for private services, which are still not as costly as it is in industrialized countries.

The video overall highlights some of the advantages of living in Costa Rica such as not having an army, having a decent education, and having good healthcare, at the same time, it shows that the country has some significant challenges and we can all agree with that.

In my opinion, I like the idea that there are not mass shootings in Costa Rica, while any time that I am in the US I am concerned that a wacko is going to shoot me along many other bystanders at any moment.

My wife and I are looking to move to Costa Rica from US. We both are on Social Security. What do we have to pay for Health Insurance? We want to stay 1 year before we apply for residency.

The amount of money you have to pay for Health Insurance depends on your income. People with income between $1000 and $2500 per month have to pay between 7% and 9%.