I am on the road and I see a Costa Rican police car with the flag of China on it, and I wonder: is Costa Rica really independent?

Last weekend (September 15th) Costa Rica celebrated 197th years of independence from Spain while at the same time early this month La Nacion newspaper announced that population of Costa Rica reached five million people with the heading “The Tico Five Million Was Born”. At the same time, unions and students get to the streets to protest a fiscal plan that aims to reduce the deficit.

This is all very poignant.

A story of Independence

Costa Rica did not have any intention to become independent. In the early 19th century, Napoleon’s occupation of the Iberian Peninsula affected Spain’s control over its colonies in the Americas. Mexico seized the opportunity to become independent along with the Captaincy General of Guatemala which included Costa Rica. Unbeknownst to Costa Rica, Mexico and Guatemala had declared independence of September 15th, 1821.

Costa Ricans did not know what to do, whether to become part of the new Mexican Empire under Agustín Cosme Damián de Iturbide or to become an independent republic. The cities of Heredia and Cartago supported the idea of being part of something bigger such as the Empire of Mexico, while the people from Alajuela and San Jose supported the idea of being an independent republic. The two factions fought each other in the Battle of Ochomogo (the mountain between San Jose and Cartago) on April 5th, 1823. San Jose and Alajuela won the battle lead by Gregorio Jose Ramirez y Castro, the commander from Alajuela who stated: “Today I declare Costa Rica as an independent free state from Spain, Mexico and any other power or nation”.

Some historians argue that the battle of Ochomogo was the true moment of Costa Rican independence, as it willingly expressed the intent to be its own nation distinct from any other.

Since that moment, Costa Rica tried to obtain and develop an identity of its own. Today, Costa Ricans are very proud of their culture and traditions, but they got to be careful to not cross the line between patriotism and nationalism.

Patriotism is an objective love for thy country and everything that comes with it with the intent to make it better. Nationalism is the subjective complex of superiority for your country mixed with a desire for your government to protect you from your own personal insecurities at the expense of everyone else’s liberties.

While for the most part, Costa Ricans have been very patriotic, in the past decades and particularly in the last few years some Ticos have crossed the line between patriotism and nationalism. The resurgence of Renovacón Nacional as the political arm of the evangelist movement, the reinforcement of the immigration police and the demonstrations against Nicaraguan refugees (just to name a few) are desperate shouts of the conservative Ticos to protect what is “national”.

Just like any other country, Costa Rica’s population is made up of people from somewhere else (immigrants) Ticos are very proud of their Spaniard heritage and they seem to forget that Spaniards were immigrants too. Only 2.4% of the population of Costa Rica is indigenous, which means that 97.6% of the population has roots from somewhere else, and thus it makes it difficult for Costa Ricans to establish what a Costa Rican is, if at all it is a mixture of cultures and ethnicities.

It is perfectly fine to celebrate Independence Day with a patriotic fervor and to acknowledge the positive elements about living in this country, but Costa Ricans must prevent falling victim of the rhetoric of hatred. Costa Ricans are proud of being helpful, kind and thoughtful, and we must continue enforcing the good values that we have developed over almost two centuries to welcome the new people who call this place a home, regardless of their nationality, faith, race or gender.

The name of the boy is Eithan Jesus. While Costa Ricans are trying to be devout to Tico Culture, I can tell you that Jesus is very Tico for a name, but Eithan does not seem very gallo pinto.

It is not of major significance whether the report states the five million mark is for total population or total Ticos, except for the fact that it is a symptom of the nationalism the country is heading to. If we are willing to forget that 10% of the population is made out of immigrants, we may be also willing to forget that those immigrants have rights and that those must be protected.

Chinese patrols and Protests on the Streets

While national pride is boosted with the independence celebrations, Ticos should not forget that they are not any different (or better) than anybody else. Having your own police cars sponsored by the Chinese government and carrying their flags on the patrols is evidence of lack of independence and just looks like tramp stamp. At the same time, Ticos criticize both the political situation in Nicaragua as well as the resulting surge of refugee applications by Nicaraguans in Costa Rica.

It seems easy to forget that what initiated the protests in Nicaragua, the increase in taxes to balance the budget due to a huge fiscal deficit. Are not Costa Ricans protesting the same thing that Nicaraguans are protesting? Are they not able to see that Costa Rican can end up like Nicaragua? Which also means that we are not any better than them?

The Government of Costa Rica is overwhelmed by an unbalance budget, if measures are not taken, the country will go into a crisis which can be as bad or worse than Nicaragua. 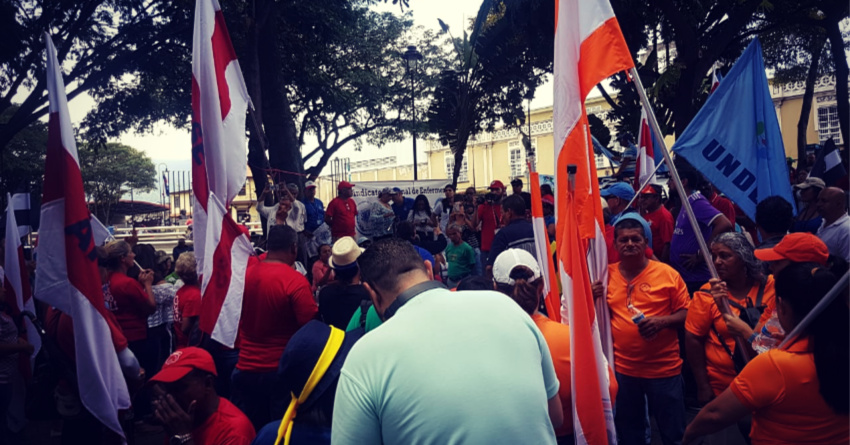 The Laws of Nature

There are two types of law, there are the Natural Laws and the Laws of Men. As you many know, I am attorney, and I have to tell you that the laws of men are an aberration. We cannot regulate natural events such as a hurricane, we cannot pass a law saying that a hurricane is illegal. We cannot pass laws against human nature, we cannot forbid love, reproduction, breathing and breeding, and thus we cannot pass a law against migration, nor shall we forget that we are all migrants, nor that migration is inherent to human behavior. The concept of nationhood and cultural identity are anachronistic to our current social structures. Being nationalistic prevents us from seeing a world of opportunities.

Unfortunately, we have failed to learn over the term of our history that we are better together than alone, and thus Costa Ricans should not enclaustrate  themselves by the demagogy of patriotism and nationalism, and instead should embrace the fact that the country is as fragile as Nicaragua and that we have a better chance of moving forward if we integrate with Nicaragua and the rest of Central America to bring balance to the region than trying to do it alone under the flag of national pride.